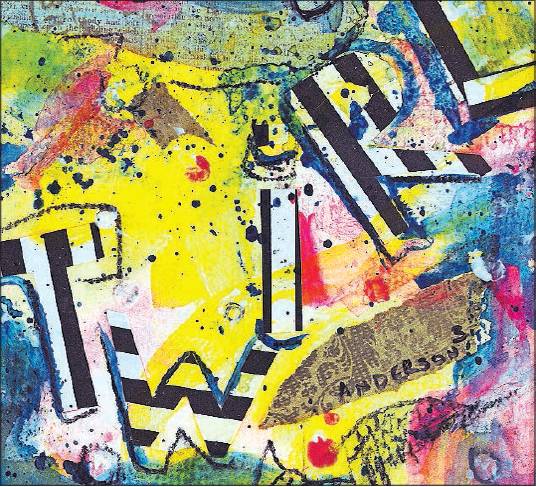 May has been a very busy month so far. I have 12 of my abstract mixed media paintings at the Highline Coffee Co. in Worthington, Ohio until the end of this month. They seem to have been well received as two sold almost immediately. I am honored that the Columbus Dispatch interviewed me about my work there and wrote a nice article that came out on Mother’s Day. The work was a lot of fun to do as it allowed me to experiment and play ‘outside the box’.

I have two series featured there; the ‘Creation’ series which are 12 X 12 inch on canvas in black Illusion frames. This series is a homage to all of the fun craft projects I did with my girls as they were growing up. I incorporate ‘found’ objects into the work from a treasure trove I had left over from those craft projects including plastic ‘gem’ stones, buttons, beads and suede lacing. The idea was to depict a playful rendering of creation from the big bang to the primordial forests and finally to the first human cultures. The colors are soft and the images are very abstract.

The second series is my ‘Manna’ series which are mixed media on paper, matted and under glass in 10 X 10 dark frames. Again, these are very playful abstract images with bright colors and torn paper, ink, acrylic, and charcoal. In every painting is a word or words that convey a positive sentiment such as; ‘give thanks’ or ‘love’. The idea is that we benefit by not taking ourselves so seriously and by appreciating those gifts from heaven that we all have access to but too often forget their power to transform both ourselves and those around us.

So, if you are in the greater Columbus area this month, pop over for a cup of coffee and to check out my work at Highline Coffee Company.

Here’s a link to the Columbus Dispatch article

This site uses Akismet to reduce spam. Learn how your comment data is processed.