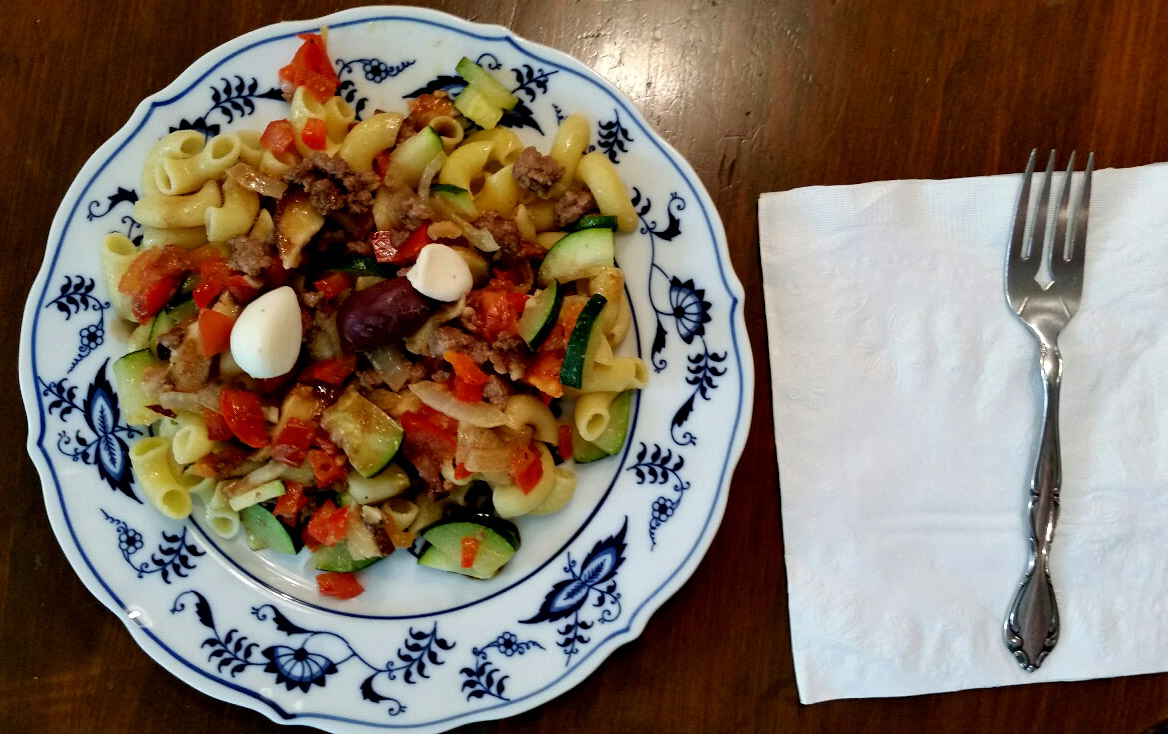 I just made dinner for Tony and I. It came out really well and was very healthy. My version was gluten and dairy free but not vegan as I added about 3.4 ounces of ground beef to it. That could easily be left out to create a lovely vegan dish.

I first sauteed my ground beef and then removed it from the skillet and added diced sweet onion and red bell pepper along with several dashes of California Olive Ranch olive oil (I like to get the big bottle from Target as it is more economical). Then I added sliced shitake mushrooms and sauteed for a few more minutes before adding half a zucchini halved and sliced. I continued cooking that until the zucchini was ‘al dente’ and then added diced vine ripened tomato. I tossed the ground beef back in and added minced fresh garlic along with a few dashes of red pepper flakes, some black pepper and a little Himalayan sea salt.

Meanwhile I had brought my water to a boil and tossed in a box of Ancient Harvest gluten free organic corn-quinoa supergrain pasta elbows. I boiled these for 6 minutes with a dash of California Olive Ranch olive oil. Then I drained the pasta and served it in a separate bowl from the beef and veggies. And voila! We topped our pasta with the saute and I added several garlic stuffed calamata olives and garlic cloves from Giant Eagle’s Market District olive bar for a great dinner.

We added sliced organic strawberries with a dash of confectioner’s sugar for dessert. What a great meal………….and we will get to have ‘fast food’ tomorrow as we have will have leftovers. Yum!

The Ancient Harvest Elbows can be found at Giant Eagle markets and other retailers as well. Online look here: Super Grain Elbows

This site uses Akismet to reduce spam. Learn how your comment data is processed.